Israel as a place of radical otherness

FK: Mr. Brenner, since 2007 you worked on the project “This Place”, inviting 10 internationally acclaimed photographers to work in Israel and the West Bank. What is the main topic of project?

FB: The project deals with Israel as a place and a metaphor. I see Israel as the pathology of the world. So it has of course to do with Israel, but in many ways you can look at these images and you don't think Israel, if you wouldn't know that it is about Israel. So it is an exploration of the human condition, on the polyphony outside and within. It is about the exploration of the human condition and the polyphony within each of us. It is of course the polyphony that Israel is about, but unless it brings us to listen to our own polyphony, the conflicts that start within our self. Most of the time we have to find the inner man. It is not about the outside. The outside journey is important in as much as it brings you back to deal with your own wars that you are waging inside or you don't dare to wage inside and that you bring outside. 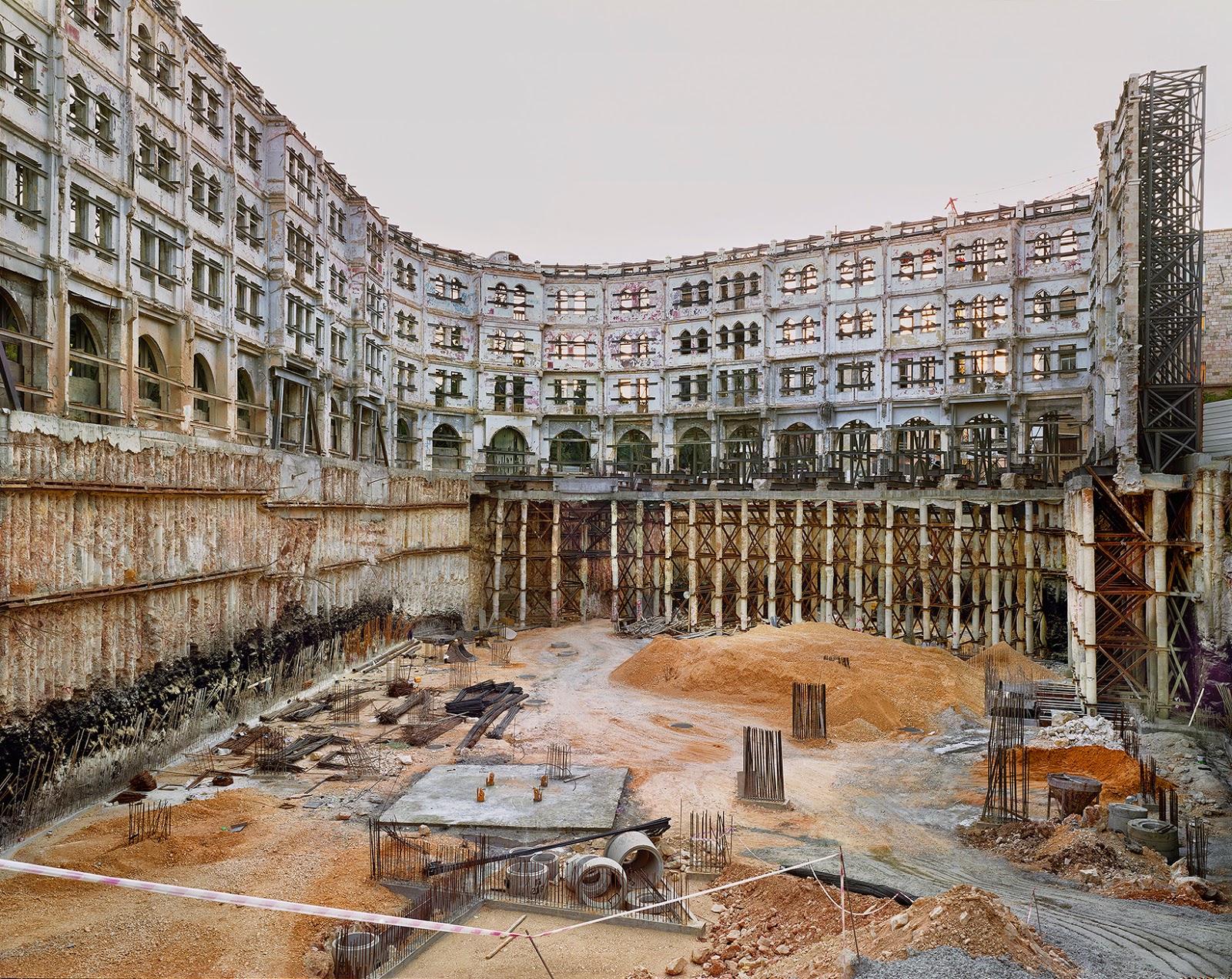 FK: What is characterizing this metaphor you talked about?

FB: The first metaphor, when I initiated the project or when I tried to phrase the working hypothesis, was for me that Israel is a place of radical otherness and a place of radical dissonance. For me it is not at all a conflict about Jews and Muslims, it is not about Israel and Palestine. It is really about three narratives. Remember this is a cake that was divided after the First World War and the French and the British divided the cake. So the French and the British were mainly Christians. So it is about three narratives: It is Christianity, Islam and Judaism. And this is basically a play, which is going on for 2000 years. Today it is only happening with new garbs. So I really look at three monotheistic religions, which translate into three major narratives who are wrestling with each other. So the idea of "This Place" is to look at Israel as a place where the maps of the sacred overlap, compete ultimately and exclude each other.

And when I say Israel as place and metaphor, I really think that the first metaphor has to do with Israel as a place of radical otherness. A place where every single person is the other of somebody else, a close and a far other: A Russian for an Ethiopian, a Moroccan for a German, a French for an American, an Arab Christian for an Arab Muslim, an Armenian for a Jew. And this goes on endlessly. But again, this otherness and this strangeness is within ourselves to discover that we are strangers even to ourselves. And I believe that for me Israel is called the Holy Land or the Promised Land. There is a promise attached to that land and that's what started my project. There's a promise for every person, wherever they come from and this is a promise of redemption. And redemption is truly about intimacy, it is about opening an inner space and an inner place in order to embrace. It is a promise for compassion for the multitude of selves within each of us and for all other human beings. This promised land,  belongs to no-one and every-one, it is nowhere and everywhere awaiting for our own humanity to awake. And maybe it is played everywhere else in the world, but also in Israel because so much has been projected on this place for 2000 years. I mean just take the church. The church is the reproduction of a Jerusalem, where ever, it is a small temple erected anywhere where Christianity has been present. So this place is very loaded.

FK: You said that you want to do a project without a political agenda. What you describe now are as well the political circumstances, the narratives and the things behind. So why was there this wish to do it apolitically, or without agenda?

FB: I didn't want to do it apolitically. How can I explain … As I said I wanted to look beyond the political narrative, not to ignore it or bypass it, but not to mistake for what it is not. What interested me is to look at the root level, to look at the archaic stakes before it becomes political or religious and to invite the people to look within. So that was what I wanted to do. Everything is political. Of course there is a political layer. But my perspective is really meta-physical; it is really an exploration of the human condition. And of course, Israel offers an incredible stage for an incredible polyphonic ensemble. This polyphony is within us. Fernando Pessoa says somewhere: "Each one is several, many, is a profusion of selves … in the outstretched colony of our being, people of all kinds exist who think and feel in different ways". There are many people who think and feel in different ways within ourselves, that is what I believe. And it is hard to embrace that.

FK: For the project you decided to work in Israel and the West Bank. Why did you decide on these two regions and what about Gaza?

FB: Originally I only wanted to work in Israel, because we didn't want the project to adopt a dual perspective. We didn't really exclude the West Bank, but we didn't include it directly. But in the formulation of the project the photographers stressed us in order to define what are the limits of this project. By including the West Bank we where running the risk of falling again in a dual perspective, for/against, victim/perpetrator, ... But the very choice of the artists that we had made was likely not to get us to end up there. So we eventually asked to define the limits of the project, we included the West Bank. And for better or for worse it has redefined what Israel is today, absolutely. But we decided to exclude Gaza, because Israel left Gaza some years back so it didn't made sense to include it. And also for security reason, we couldn't be responsible for the security of people. And we thought that Israel is far enough complex not to add one more layer. The project is to expose people to the many fault lines, to the many rifts and paradoxes of this highly contested place. And I wanted to look at Israel without complacency, but with compassion. This double movement was very important.

FK: Another interesting aspect is, that you only chose international photographers. How do you relate to this, as especially in Israel we find an amazing art and photography scene that you could have relied on?

FB: Within one people, we wanted outsiders, but we wanted "spectateurs engagées". We didn't want people who were trapped just by the very fact that they live there in the Israeli-Palestinian dialectics and too close to the subjects. But at the very beginning, I had a vision to create a counter point - I didn't know which form it could take – and to have 12 artists and four or five could be Israeli and Palestinians. And then because I had to carry on so much for the project, I abandoned the idea. Later one of our curators came back with that idea but we photographers didn't accept it. And then also you must understand that at the beginning I also abandoned that idea at least for some time because out of the Palestinians we wanted to include, some answered that they will never work on a land of occupation, even though they have basically been fed and nurtured by great Israeli dealers. And then later, when one of our curators wanted to include them, they asked "Why do you come to us so late? It is suspicious". It is very loaded and this is sad. Regarding the boycott of Israel, Fazal Sheikh said that he thought he could do more by looking, observing and bringing his point of view than by just boycotting. So it is stupid that they were given the possibility and they refused it at the beginning. This is why I didn't pursue it. And then when we went to them later, they found it was suspicious, which is actually true. So then we couldn't have Israelis neither because it would have made it political while the entire idea was to look beyond that.

FK: For the moment, the world premiere at the Dox Center in Prague is the only venue in Europe for the world tour. Do you plan to make more shows in Europe?

FB: It is not easy in Europe. The truth is, France didn't want to take it. It should have gone to the “Jeu de Paume” in Paris, but out of very political reason it was denied. I won't quote the words, but it was very ugly. And London obviously despite all the connections was afraid. Somebody said about "This Place" that it is the hottest potato in the art world and they don't want to burn their hands with that, while they haven't seen the show. And we talk about a major art gallery in London that I won't quote. That was what our former curator reported. We definitely want to have a show in Berlin and Martin-Gropius show is interested, but they have not committed. I hope with what has been published it will work out. We would love it to come to Germany.

FK: So when you looked for an exhibition venue, you were confronted with the point that the project was seen in a political light.

FB: This is what always comes up when you say Israel. And in a way, the subject is always first in the way people see it and not the modality. Meanwhile the modality really is to open another space.

FK: Mr. Brenner, thank you very much for the interview.

More information about “This Place” is available on the project website. Until the end of February the project can be seen at the Dox Center forContemporary Art in Prague. The next venue of the travelling exhibition will be the Tel Aviv Museum of Art. The interview was conducted at the opening weekend in Prague in Octobre 2014.